***Warning, the following may contain spoilers for Sirius the Jaeger. Reader discretion is advised.***

It is the 1930s and the political climate of the world is at the height of tension. With the risk of conflict on the horizon, it is easy to overlook what lurks within the shadows.

For centuries, monstrous beings —vampires — have been exerting their influence wherever they can. No matter the era, their goal has always been the same: Humans are to remain as food.

To combat the frightening might of this enemy, Jaegers (elite vampire hunters) have made it their mission to defend humanity. Among their ranks is the young, but highly skilled Yuliy (voiced by Yuto Uemura).

Unlike his fellow Jaegers, Yuliy is from an ancient tribe known as the Sirius. Since time immemorial, the Sirius have been the guardians of great power and knowledge; the very thing both vampires and governments seek.

Yuliy does not know the full history of his people, but their teachings may be the thing that saves the world from terror.

Although I try not to do this, I did have some preconceptions when going into Sirius the Jaeger. I knew this was to be a vampire-based series, and to tell you the truth, the very idea of such a story exhausted me.

The prospect of a group of vampire hunters traveling about and doing what their job title suggests hasn’t excited me for a long time. To be fair, my ultimate assumption was, Sirius the Jaeger would be passible. It would do what it needed to do, and that would have been all there was.

Low and behold, this series was actually far better and far more interesting than I could have expected.

Don’t get me wrong, Sirius the Jaeger had many of the same tried-and-true (a.k.a., stale) vampire tropes; we will get to those bits momentarily. What’s important to remember in the meantime is this series was successful because it tightened up the right spots and it put a neat spin on a few key areas.

For example, it was great how Sirius the Jaeger set itself in the 1930s. Doing this created a beautiful blend of history, modernism – and maybe it was just me – some steampunk-esque stylization. Granted, knowing the devastation of World War II was only less than a decade away sort of soured this show’s message of everyone living in harmony. Either way, not putting this story in contemporary times helped make everything feel more fantastical. To hit upon the real heart of the matter, Sirius the Jaeger was at its strongest when it played up two points.

The first was the main character, Yuliy. I want you to imagine the best person to fight a vampire. How many of you instantly thought, “Another vampire, of course.” This series wasted no breath in establishing Yuliy as non-human – or at least, not fully human (I’m still not entirely sure).

However, Sirius the Jaeger was clever in that it did not make Yuliy a vampire who hunted vampires. I’ve seen that set up far too many times to care anymore. Thus, when this series did something else, it was a refreshing breath of fresh air.

I’ll let you see for yourself what Yuliy truly was. 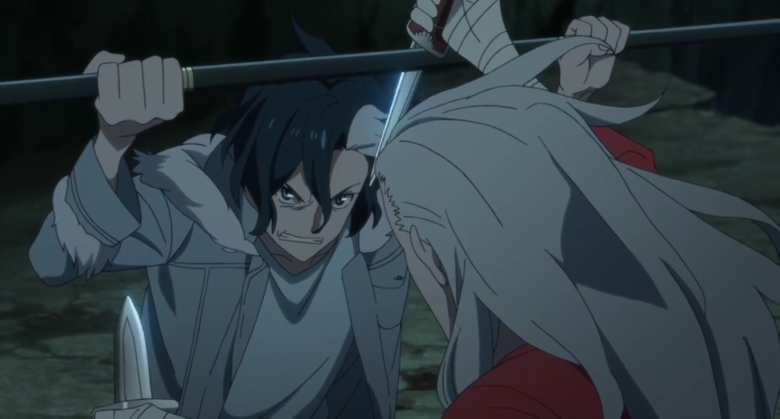 Secondly, Sirius the Jaeger had a superb storyline with Yuliy, his brother Mikhail (voiced by Takahiro Sakurai), and their relationship. Here was where this series could have fallen on its face, but fortunately, this was what made the whole thing worth sitting through.

Without giving away too much detail, Yuliy and Mikhail were extremely close as children. A tragedy then struck, and the two were separated. Jump to the events of our main story where the brothers were reunited under compromising circumstances. Like earlier, I had an impression of where this series would take this path, and once again, I was pleasantly surprised with the results.

The Yuliy-Mikhail plotline was what made Sirius the Jaeger what it was. The shame of it all was this series couldn’t help itself by adding more.

There were three major issues with Sirius the Jaeger. The first was unfortunate. The second was underdeveloped. And the third was absolutely unneeded.

To begin, the villains were boring. Sirius the Jaeger was one of those shows which escalated its antagonists. These characters gradually grew more “threatening” as the story went on. I get the progression, and I have seen it work in many series. However, those series where it has worked best have been twenty episodes or longer.

In just twelve episodes, Sirius the Jaeger went through roughly three different bad guys, and each of them had the same reason as to why they were meant to be intimidating. They were vampires, and that was it.

I will admit, the villains of Sirius the Jaeger wanted to dominate the world, which is pretty evil I suppose. Too bad this is the same exact goal of every other secret vampire organization. Hell, even their look was the stereotypical vampire — frilly lace, capes, fancy hats, and black. I was waiting for one of these characters to be named Dracula to check off all the boxes. The second issue was Yuliy’s fellow Jaegers. What were their names again? This group of expert vampire hunters could not have been more underdeveloped.

We learn almost no information about their respective backstories, nor were we told how long they had been Jaegers. Also, during a fight, they were mostly overshadowed by Yuliy. As far as I know, the Jaegers were dead weight.

Finally, there was Ryoko Naoe (voiced by Rie Takahashi) and the entire romance plotline she brought to this series. Why was this a thing? I don’t have much to say about this since it served no purpose whatsoever. Anything that could have been done with Ryoko was taken care of by the story between the brothers. This potential love interest was not needed.

To give credit where it’s due, Ryoko was shown to be quite useful in a fight. Sirius the Jaeger did almost nothing with that establishment, but what are you going to do?

To make a long story short, this series had a ton of mindless fluff. If I had to guess, Sirius the Jaeger added these elements out of some sort of obligation. I’m not sure what that obligation could have been, and yet, that is precisely the point I am trying to make. This was good; simple as that.

At its core, this series had a solid story, strong characters, and it freshly presented everything. Without a doubt, this was a surprise.

That said, with this show came a bunch of cumbersome baggage. Weak villains, underdeveloped elements, and needless side plots that went nowhere ran rampant.

Luckily, there was more than enough to enjoy despite all the shortcomings.

Sirius the Jaeger is a series I recommend.

But these are just my thoughts. What are yours? Have you seen this show? What would be your advice concerning Sirius the Jaeger? Leave a comment down below because I would love to hear what you have to say.

And if you liked what you read, be sure to follow me here and on all my social media sites so that you never miss a post or update. Also, please share this review across the internet to help add to the discussion.

I’m LofZOdyssey, and I’ll see you next time.

This site uses Akismet to reduce spam. Learn how your comment data is processed.